By Unknown August 05, 2016
The evolution of the Efficient Dynamics engine family has focused on further reducing fuel consumption and emissions at the same time as optimizing performance characteristics. A number of individual measures have been implemented to make the drive units even more efficient, and the resulting drop in consumption is evident on both the EU test cycle and in real-world driving. The improvements that have been incorporated to minimize emissions are furthermore designed to lower levels not just of emissions but also other exhaust gas components.
Gasoline engines.
For the gasoline engines, the BMW TwinPower Turbo technology comprises 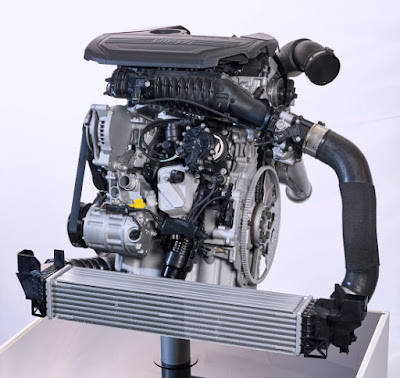 The turbocharging system:
consisting of a turbocharger integrated into the exhaust manifold that enables the flow dynamics of the recirculated exhaust gases to be utilized to particularly positive effect both are  housed together in the cylinder head. The turbocharger casing for the three- cylinder engines is made from either aluminium or steel depending on the output variant, while the four-cylinder units all feature steel casings.
direct injection system:
This  provides for added efficiency in the new gasoline engines. The injectors positioned centrally between the valves are fed from a new fuel pump via a modified system of fuel lines, and will in future operate at an increased maximum pressure of 350 bar. The higher injection pressure enables even more precise metering of the fuel and has the additional effect of helping to improve emissions quality over wide load ranges.
advanced cooling system:
The more advanced cooling system fitted in the new generation of engines likewise serves to optimize the combustion process with the aim of reducing both CO2 output and other pollutant emissions. The new coolant pump now has separate outlets for the flow of coolant to the cylinder head and engine block, which results in far more effective thermal management.
Balancer shafts :
These shafts iron out the vibrations that occur when power is transmitted to the crankshaft. Three-cylinder engines will in future benefit from a new balancer shaft complete with a modified drive mechanism that results in a weight saving, improved excitation and further enhanced acoustic properties.
Other modifications that have a positive impact on engine efficiency include the use of a single-piece timing chain drive, which has the additional effect of optimizing acoustics. Plus, the revised engines are fitted with a new belt drive that is now the same on all variants. An L-shaped belt arrangement is used for driving the alternator, water pump, torsional vibration damper and air conditioning compressor.
The new engines deliver a further cut in fuel consumption and emissions of up to 5%, and an increase in the power units’ output and maximum torque of 5 kW/7 hp and 20 Newton meters (15 lb-ft) respectively.