Volkswagen is presenting a fully autonomous, electric Microbus concept at the North American International Auto Show in Detroit.The I.D. Buzz is built off the Modular Electric Drive kit (MEB). With two-motor, all-wheel drive, a fully autonomous driving mode (“I.D. Pilot”) and a new generation of display elements and controls, the concept conceptually follows the new Volkswagen brand strategy.
The all-wheel drive system has a total output of 369 hp (275 kW) and an NEDC electric driving range of 600 kilometers (270 miles on a predicted US. driving cycle). One electric motor at the front axle and one at the rear each deliver a power output of 201 hp (150 kW), distributed between the two axles by an electric propshaft. The I.D. BUZZ shown in Detroit can accelerate from 0 to 60 mph in about 5 seconds, with a governed top speed of 99 mph.
The vehicle’s 111 kWh battery can be charged to 80% of its capacity within 30 minutes using the Combined Charging System (CCS) or an inductive charging interface, with a charging rate of 150 kW.
As an alternative, the battery can be charged from any conventional household outlet and at charging stations. The all-wheel drive configuration is just one of several that are conceivable. Thanks to the MEB, it would be just as easy to equip the I.D. BUZZ with a rear-wheel drive setup producing up to 268 hp (200 kW) and a smaller 83 kWh battery, depending on the region and purpose of use.
Volkswagen says that due to the MEB underpinnings, space utilization is better in the I.D. BUZZ than in any other electric vehicle. Using an extended MEB-XL platform, this concept vehicle—which is 194.6 inches long, 77.8 inches wide and 77.3 inches tall, with a wheelbase of 129.9 inches—offers an very spacious interior for its class. 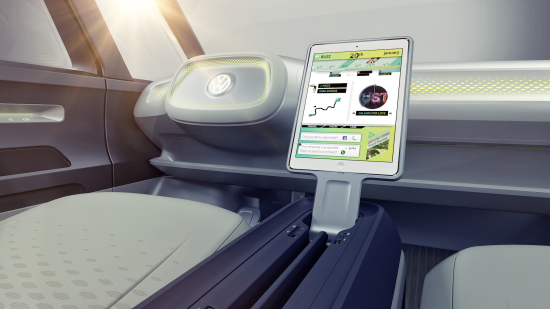 Communicating with LEDs. The I.D. BUZZ communicates with its surroundings via the LED lighting at the front end. The LED headlights interactively mimic the gestures of the human eye and thus interact with other traffic. The concept vehicle masters these light scenarios: