The Evolution of Automotive Air Conditioning

By Gaurav Goel May 20, 2018
Yet for much of the history of the automobile, air conditioning was either a cutting-edge luxury or a sci-fi writer’s dream. The automotive air conditioners of today are the result of a century’s worth of invention and refinement.
The only way to keep cool a closed-body automobile prior to 1940 was to raise an adjustable windshield that opened vertically or to remove the side curtains. The opening of the windshield was restricted to about 13mm so that the passenger compartment was sufficiently pressurized while minimizing infiltration of the hot air from the engine.
Subsequently, windows could be cranked up and down for the desired airflow. In addition, vents under the dashboard facilitated air circulation. These ventilation systems were rudimentary, as they did not filter dirt, dust, pollen or insects from the air. Thus, the quality of the air circulating through the passenger compartment was poor.
The development of the automotive air conditioner began in earnest in 1930 when General Motors Research Laboratories conceived the idea of the vapor compression system with R12 refrigerant. The cooling capacity of the automotive air conditioning system was determined to be 1 ton, (about 3.5kW). This estimate was half of the cooling capacity of the present system.
In 1939, Packard becomes the first car manufacturer to offer air conditioning as an option. The cooling system is located in the trunk, rather than in the dash, and you have to manually install or remove the drive belt from the A/C compressor to turn the system on or off. The option costs $274 at a time when the average yearly income is $1,368. That, plus the start of World War II, causes the option to be short-lived. 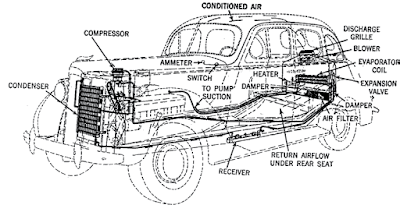 The first practical automotive air-conditioning system developed by Packard in 1939
After the war ended, air conditioning growth resumed with Cadillac advertising a new, high-tech feature called air conditioning controls. However, there was still one problem. The controls were mounted nearly two meters from the driver’s seat on the rear package shelf.
It was not until the 1953 model year that automotive air conditioning staged a comeback and this time it survived and flourished. In 1953, Harrison Radiator Division of General Motors developed a revolutionary air conditioner that could be mounted in underhood in the engine compartment. This was a much more efficient design.
In 1964, Cadillac introduces Comfort Control. For the first time, drivers can set a preferred temperature, and the system will automatically adjust the A/C or heater output to keep the car interior at that temperature. In 1968, The AMC Ambassador becomes the first car to include A/C as standard equipment, rather than an added option. 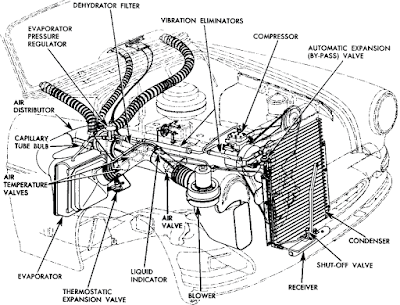 Underhood disposition of the components of the automotive air-conditioning system developed by Harrison Radiator and Pontiac Divisions of General Motors in 1953 that became an industry standard.
The 1970s marked by the intense debate centered on the ozone depletion issue that threatened the continued use of the chlorofluorocarbon (CFC) compounds. Automotive air conditioners used CFC refrigerant designated R12. With the unprecedented growth of automotive air conditioning expected to reach an industry-wide penetration rate of 70% by 1980, this debate was a source of concern to the U.S. automotive industry.
The controversy centered on the linkage of CFC compounds to the ozone depletion continued through the 1980s culminating in the adoption of the Montreal Protocol in September 1987. It called for a phase-out of the fully halogenated CFC compounds including R12. Faced with the prospects of an impending ban on R12, Carmakers developed an alternate air-conditioning system with R134a refrigerant. This entailed the development of new components like condensers and compressors, as well as new materials like lubricant and desiccant. There were many changes during the 1980s relating to cooling performance enhancement, body styling, and fuel economy. 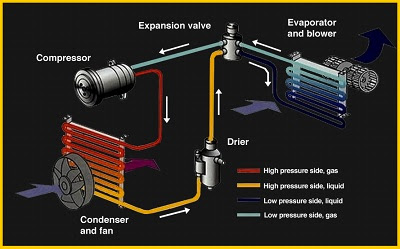 Beginning in 1992, carmakers around the world started implementing the changes necessitated by the replacement of R12 with R134a. These changes were far from being unobtrusive. Contrary to earlier expectations, the conversion proves to be an onerous task since it entailed replacement of not only the refrigerant but the lubricant and desiccant as well. In addition, condenser, compressor and control switches had to be changed.